I have organized conferences, panels and round-tables nationally and advocated for graduate reform.  Believing in diverse diverse career preparation, I argue for a a multidimensional educational experiences. The model of graduate education in our German program includes graduate students in outreach, assessment, curriculum development, and digital skills: 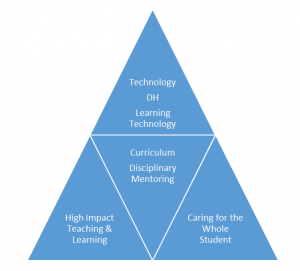 —“How Do We Teach Language, Literature, and Culture in a Collegiate Environment and What Are the Implications for Graduate Education?” Die Unterrichtspraxis / Teaching German 41.1 (2008): 57-60.

Hosted a panel discussion with the most important thought leaders resulting in galvanizing the conversation and planning follow-up events to increase the sense of urgency for reform: “Graduate Education in the Humanities: Preparing for a Meaningful Future.” Michigan State University. April 2013.

Continued engagement on panels on graduate education on the national level.

Enlightenment and the Pursuit of Happiness 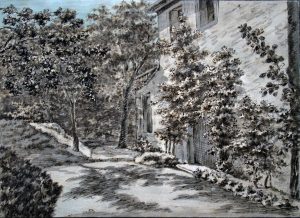 No longer oriented on the religious dogma of the institution of the Church, the Enlightenment is characterized by a foundational secularization. It trained its focus on a moral life and happiness on this earth rather than in the afterlife. This opens the path for a new understanding of the individual. A new belief in a future that could be self-directed drove both individual and social dispositions. Scientific interest also raised awareness that the natural—including human nature–is not merely given but can be altered and improved, giving rise to the overarching pedagogical impulse for self-improvement, the possibility of social mobility, and the enhancement of one’s living conditions. Together with the sense of human perfectability with its telos of happiness (Glückseligkeit) this framework of practical or applied reason (praktische Vernunft) made both self-improvement and the task of shaping one’s environment meaningful and useful.

Domesticity, Sociability and the Work of Culture in the 18th-Century:

One of the key events in German cultural history of the 18th century is the emergence of the middle class as an important locus of cultural innovation, creativity, and diversification. This cultural work took place in the private sphere, in particular in the domestic sphere and in family life and extended into larger circles of social connection. This course is designed around these key concepts of domesticity and sociability and how increasing literacy and the reading ushered in by the Enlightenment contributed to this major cultural, social and eventual political change. We will examine the question how culture contributes to changes in the lived environment and how people interact with one another. By engaging with literary and cultural texts and visual representations, we will explore how culture works. Why culture matters, then and now, and how culture operates. What are the conditions for cultural innovation or creativity? What is the relationship between cultural activity and social and economic change?

In this course, the focus is on intensive practical communication skills development in the German language (writing, speaking) predominantly within contemporary German culture. The course emphasizes face-to-face communication. The course includes reflection on transferable skills, self-analysis and strength finding, life plans, career interests as you preparing for the transition to the world of work. The course is conducted in German.